26th Jun 2015 by Stuart Clark in Adventures in Clean

I attended Adventures in Clean for several reasons: I've done lots of work with Clean Learning and Training Attention and most of this has centred around Systemic Modelling which uses Clean Language quite conversationally and I wanted to experience it being used as a psychotherapeutic tool; I'd been doing quite a bit of self-development with Caitlin Walker and Shaun Hotchkiss and I thought it would be a good idea to experience working with different facilitators...

I attended Adventures in Clean for severalreasons…

Although I couldn’t help but notice whatwas happening with other people and observe how the facilitators were working, Iwas there completely for my own self-development. I had set myself a developmental task to go first - and I also thought this might beuseful for other people because I understood the process. My first session waswith Shaun, who was actually just the right person to work with my initialdisclosure, “I want to be OK with being gay.” He gave me a big smile and wasunbelievably loving and caring; he made everything seem OK and possible.

My next session was with Penny Tompkins andthis built on the first one; it was as though I was sorting everything out infront of me. Then I worked with Penny and James Lawley together. I had about 20 bindsor more; my whole landscape was a landscape of binds. James focused on one aspectand asked me, “What do you want?” I kept saying, “I don’t know” and repeatingthe bind. He was pushing me to say what I wanted, and eventually I got to thepoint where I realised it is OK to want the things I want in life, and that itis OK to have contradictions.

The main question I had was about“knowing”. “How will I know it will be like that when I leave the weekend?” Irealised it was possible to know things like this. Penny asked me if I knew Iwas gay and I remember saying, “Other than that I’m alive, it’s the mostcertain thing I’ve ever known in my life.”

After the session with Penny and James Ihad mega-energy bursting out of me and I went running up the hill nearCaitlin’s house. Then I was serene and calm for the rest of the weekend. I wenton the Whirly Gig and spent time contemplating and adjusting to what I knewnow.

Since Adventures in Clean things have beendifferent. For example, I went to a focus group last night, with people I hadnever met before. Something came up which prompted me to tell a story aboutbeing gay, so I shared it with the rest of the group. In the past I wouldn’thave done that. Now it is OK to be myself in front of other people. 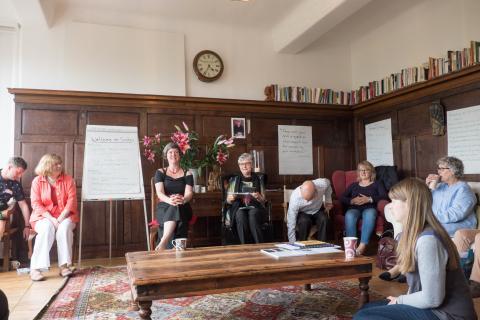 A review of the “Adventures in Clean” event

After spending 25 years in business operations, leadership and management, Stuart Clark decided to change his career path and to focus on his belief that everyone can work together from a position of ‘I’m OK; you’re OK’ and the idea of producing results that benefit everybody. Stuart believes in detecting patterns in organisations and people and, in turn, working towards sustainable solutions and outcomes. He loves to use Systemic Modelling, the language of curiosity and exquisite listening to create transformational change. Stuart is a Level 5 accredited Business Coach and Mentor with the Institute of Leadership & Management, a Practitioner in Neuro Linguistic Programming and a certified Clean Language Facilitator. He coaches individuals using Clean Language , Symbolic Modelling and Clean Space - and groups using Systemic Modelling. He has also worked as a coach and supervisor for Genius Within, coaching people with neuro-diverse conditions including dyslexia, multiple sclerosis and brain injuries.